A touch of friendly father-son rivalry is swelling the coffers as family and friends prepare to tackle the Great North Run.

Paul and Ben Ryan decided to run the popular half-marathon in memory of wife and mother Rachel who died after developing an aggressive form of oesophageal cancer aged just 47.

They have also enlisted the support of friends and running club members and have already raised more than £4,000 for St Teresa’s Hospice where staff cared for Rachel in her final few days.

Paul, a company general manager, of Darlington, said: “Rachel began having acid reflux issues in January and in February was diagnosed with cancer. It was so aggressive and had spread so quickly treatment was not possible and she died at St Teresa’s Hospice in March.

“The love and care the staff showed Rachel, me, our two boys, Ben and Sam, her sister Caroline, and friends in her last few days was amazing and befitting of Rachel. So as #TeamRachel we are undertaking the Great North Run in order to raise as much money as possible for the charity.

“Rachel was always willing to go the extra mile for anyone in need, working firstly in education but latterly helping people escape debt with Christians Against Poverty. She was always the first to help others, whether it be helping new parents through difficult times or delivering meals to families who needed them. The world would be a better place if we could all be more like her.”

Paul has set up a Just Giving Page at www.justgiving.com/fundraising/TeamRachelRyan and Ben, 19, a classical singing student, has set up a rival team to raise even more money.

“I have been running for the past eight years and joined Quakers Running Club,” said Paul. “Ben, who used to volunteer at St Teresa’s Mowden charity shop, has started training and if he sticks to the plan I’m sure he will beat me on the day.”

Rachel’s sister Caroline is also planning to run as are some members of the Quakers Club including Michelle Boshier.

She said: “I’ve been involved with St Teresa’s for over 10 years, volunteering in the in-patient unit, helping with the events staged throughout the year, such as Bark in the Park and the Santa Run, with my son Lewis.

“Through lockdown in 2020 I couldn’t leave the house so I ran up and down my path for 2.6 miles as I was missing my running to raise money for St Teresa’s. Lockdown lasted longer than I thought – 105 days.

“I had a Great North Run place for St Teresa’s, which is an amazing place that gives support to many people and their families in their most difficult days. When Rachel died, at her remembrance service, we agreed to run the Great North Run in her memory.”

St Teresa’s Hospice still has guaranteed charity places left for the Great North Run, which will be held on September 11. Anyone interested in signing up can register online at www.darlingtonhospice.org.uk/great-north-run/ or contact the Events Team at the Hospice for more information on 01325 254321 or [email protected]

Community Support Fundraiser Emily Robson said: “We’re lucky to have such an amazing community of runners supporting St Teresa’s every year. In September we expect to have 120 people taking part in the Great North Run, and hope to raise in excess of £30,000 in aid of the Hospice. There’s still time to sign up to join this dedicated team. In return, you’ll receive help from us to raise funds, as well as a running vest and access to our marquee at the finish line charity village where I look forward to meeting our wonderful supporters.” 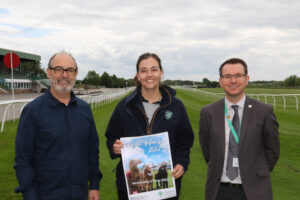 Saddle up for a furlong of fun! 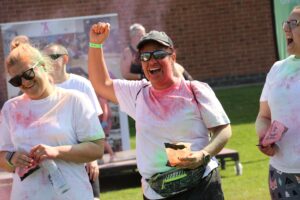 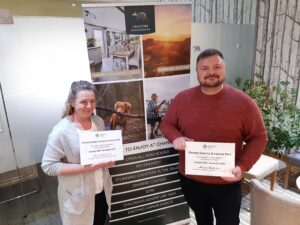 Staff and holidaymakers are funding raising at their leisure to support a cause close to their hearts.